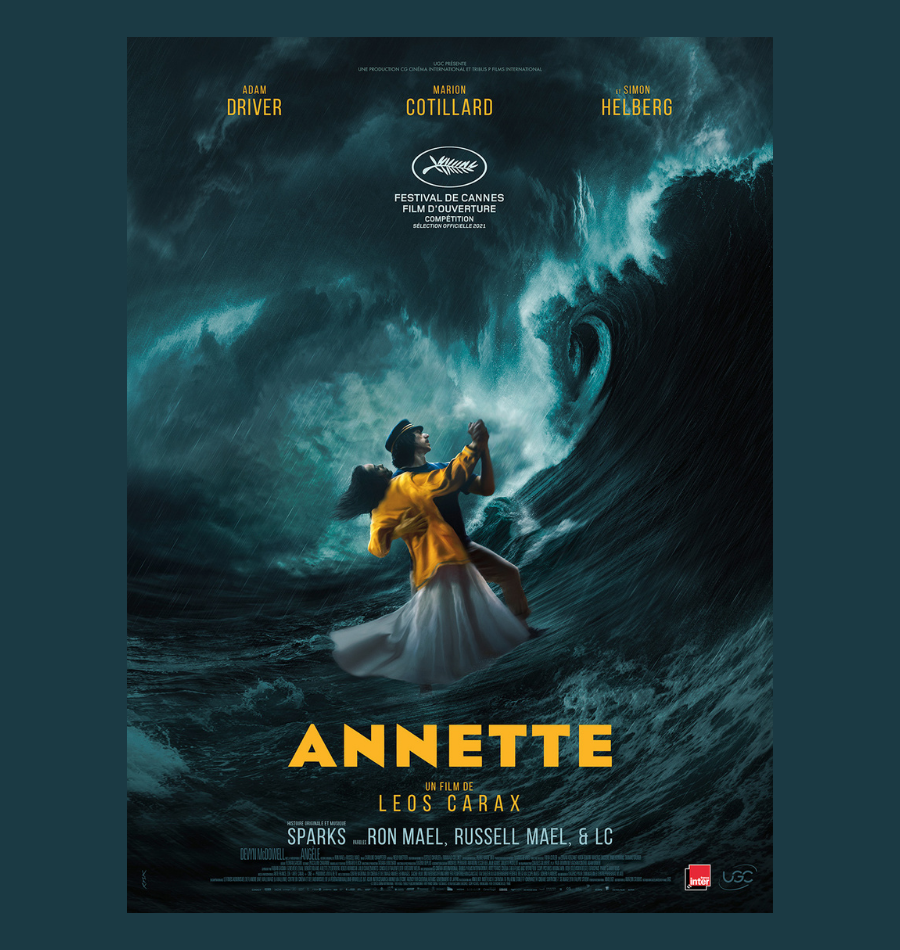 “Annette”, by Léos Carax and produced by CG CINÉMA, wins the “Prix de la Mise en Scène” at the Cannes Film Festival 2021. A look back at an already cult film.

Released in theaters on July 6 and produced by CG Cinema, “Annette“, the latest film by Léos Carax – back after nine years of silence on the screens – won the “Prix de la Mise en Scène” at the Cannes Film Festival 2021, after having opened.

On a music of the Sparks – who are at the origin of this project of rock opera – Marion Cotillard and Adam Driver deliver a magnificent duet in a dark and magic visual universe…
Whatever one thinks of this French director who fascinates some and annoys others, CG Cinéma is particularly proud of the success of this superb feature film that is making headlines…!

Some reviews of “Annette“:

“Annette is an abundant and exciting work that will make you hate it as much as it will make you love it. (…) Let yourself be carried away by this unique, imposing and theatrical work.”
(Le Blog du Cinéma)

“Here is a divisive director. He is praised by some who are ready to follow him with their eyes closed in the singular journeys he proposes each time.”
(Première)

“There is in Carax’s way of filming a taste for challenge, for achievement, which makes him similar to the great sportsmen: as if each film, ever more ambitious and crazy, were challenging for the title of world champion.”
(Les Inrocks)

“The visual universe of Annette is a work of goldsmith. (…) Much more traditional than Holy Motors, Annette delves into the depths of the human soul whose cerebral manifestations come out in song. A feature film accessible, worked and dreamlike.”
(bullesdeculture.com)

“Adored or despised, one thing is certain, Annette does not leave anyone indifferent. A true cinematic experience, Léos Carax’s film is likely to leave its mark for many years to come.”
(musicaleavenue.fr)

We use cookies on our Web site to provide you with the most relevant experience by remembering your preferences and repeat visits. By clicking "Accept All" you consent to the use of ALL cookies. However, you can visit "Cookie Settings" to provide controlled consent.
Cookies settingsAccept allReject all
Cookie management

This website uses cookies to enhance your experience when browsing the site. Of these, cookies that are categorized as necessary are stored on your browser because they are essential for the basic functionality of the website. We also use third-party cookies that help us analyze and understand how you use this website. These cookies will only be stored in your browser with your consent. You also have the ability to decline these cookies. But disabling some of these cookies may affect your browsing experience.
SAVE & ACCEPT
Powered by